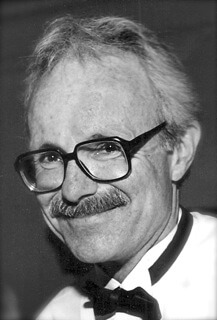 Dawson Leonard was the father of Senior Program Leader Erika Leonard. He took great pride in having his daughter – and his family’s name – associated with this work, which he was confident would thrive long after he was gone.

Dawson knew firsthand about bullying, prejudice, and the suffering they create. As a public defense lawyer, he saw lives forever altered by violence and abuse.

“There are people who will not suffer and who will not die as a result of what you do,” he said about Kidpower in his final days, “and when I see the name ‘Leonard’ in connection with Kidpower, I am honored to be part of it.”

Dawson was an imperfect man and an imperfect father who personified the Kidpower saying, “You do not have to be perfect to be great.” His complete, unwavering belief in his daughter lives on as a gift that never stops giving. It continues to fuel every aspect of Erika’s work with Kidpower, and so Dawson continues to touch lives every day.

Below is a piece Erika wrote after her father’s death and read at his memorial service.

My Father Made the World More Beautiful

My father made the world more beautiful.
He guided others to create beauty
and to appreciate more fully
the beauty surrounding us.
He did this with words.

In my father’s mind, in his speech,
and through the tip of his pen,
the English language was an art form.
Punctuation, word choice, and sentence structure,
enlivened by his passionate belief in their potential,
were no longer the drudgery commonly taught in school
but rather the elements of an artistic medium.

And the soul well versed in that medium could create beauty.

My father taught me that the sounds of the words themselves,
the cadence, when skillfully crafted, could carry us like music.
That was beautiful.

The power to create a visual image
with nothing but sound or written letters,
to stir feelings and memories in others,
that was beautiful.

My father taught me that words were the tools
to lift a thought from the mire of your other thoughts,
to polish it and present it for consideration.
That was beautiful.

And in an ever-changing world
where the physical is impermanent,
where flowers wilt and bodies die,
words are the bridges
bringing us closer to our contemporaries
and the lights shining back to our ancestors
and forward to our descendants.

This was the lesson of my father.
Our family, our community,
shall remain richer for it.

As a man of words and of music,
my father was most at home
in a realm outside the physical.
Though his body has died,
I will forever take comfort in knowing that,
as the power of stories, songs,
jokes, debates, and family anecdotes
carries us along and ties us together,
my father will be there,
smiling at the beauty of it all.

~ All my love forever, Erika