What Should I Tell My Kids About When To Fight? Kidpower Answer to a Parent's Question 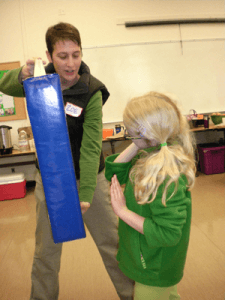 Learning to fight to protect yourself

“When is fighting the safest choice? I don’t want my children to be victimized, and I also don’t want them starting fights or thinking that violence is the right solution to most problems. How do I tell my kids where to draw the line?”

Many parents are ask us what to say to their kids about fighting. At Kidpower, we believe that fighting is a last resort. We also believe that people do have the right to fight if this is the safest way they can protect themselves from being harmed.

Before we teach children and teens how to fight in our self-defense workshops, we coach them until they are successful in practicing skills that will make fighting unnecessary most of the time including:

We tell our students, “When we started Kidpower, many people told us NOT to teach kids to fight. They said that kids would misuse these skills when they were annoyed or upset. We want you to promise that you will ONLY use the physical self-defense skills we teach you when someone is about to harm you by hurting you or taking you away — and you cannot leave and get help.”

Each student looks the instructor in the eyes, shakes hands, and says, “I promise!”

Kidpower teaches both emergency-only physical self-defense skills like an eyestrike; a heel palm or elbow to the face; and a knee to the groin that risk causing injury —  and “bullying self-defense skills” like a shin kick; a heel palm to the solar plexus; or a pinch to the thigh or upper arm that are more likely to cause pain without risking injury.

We make a distinction between bullying self-defense and emergency self-defense because leaving is different in a situation like school, where kids really don’t have a choice about being there. When kids are stuck in a situation where they are constantly physically threatened and the school is not able to stop it, we believe kids have the right to protect themselves.

Because families have very different values about where to draw the line when it’s another child who is being aggressive, we tell our students to talk specific problems over with their parents to get guidance about when they can use their bullying self-defense skills.

When it’s a chronic situation, like having another kid pull your hair or push you around, and the adults in charge do not seem to be able to stop it, sometimes one strong move can end months or even years of harassment. When I was a child, there was one girl who spent years leading other girls in shunning me in elementary school. One day she cornered me in the bathroom, saying she was going to dunk me into the toilet to clean my dirty face. When pushed to the wall, I kicked her in the shins and left.

I should then have gotten adult help, but this was, of course, long before Kidpower. Fortunately, even though this girl and her friends complained about me to the teacher, the teacher believed me and not them. After that, all the bullying stopped, and some of this girl’s followers even eventually became my friends.

Often just knowing how to stop an attack yourself physically can give the confidence to use other self-protection tactics more effectively. One shy boy was constantly being shoved and tripped by a couple of other kids in his school.  After his Kidpower class, he used his awareness to avoid most of these problems. When a bigger boy came after him anyway, he yelled, “STOP! GO AWAY!” The bigger boy was so startled that he stopped and left quickly.

As a parent, you can tell your children that they might get in trouble with the school if they fight to protect themselves from being hurt by another kid, but they will not get in trouble with you. Timothy Dunphy, our other program co-founder, told his daughter that, if she got suspended for protecting herself (NOT for starting a fight), he’d stay home and play with her.

We recommend rehearsing with your children how to make a report to the adult in charge if they have a safety problem, especially anytime they need to use a physical bully defense skill, using a calm, controlled voice rather than a whiny voice. For example, “Excuse me, I need help. We’re having a problem. Jeff kept pushing me and pushing me. I tried to leave, but he kept following me. I told the yard duty, and she believed Jeff instead of me. Jeff got mad that I told. He said he would hurt me. He was coming at me with his fist, so I kicked him in the shins. Then I left to get help from you. Please call my parents.”

No, talking to an adult like this is NOT natural for kids, or for anyone. Strong communication skills are learned behaviors, and they are skills every child deserves to have. Even very young children can learn, with practice, to communicate more clearly.

Advocating for your kids can make a big difference in the outcome. One mother wrote to her daughter’s middle school principal, “You have not protected my 12-year-old daughter from being harassed at school. I have told her that, the next time a boy tries to grab her breast, she can use one of her bully physical self-defense skills to protect herself. If you punish her, I’ll fight it all the way to the school board!”

The next time a boy tried to grab her daughter’s breast, the girl moved away and shouted, “LEAVE ME ALONE! I MEAN IT!” When the boy kept trying to grab her, she knocked him flat with a heel palm to his solar plexus. The boys in her class stopped bothering her, and she did NOT get into trouble.

Again, we believe that fighting to be should be the last resort. Reacting automatically to aggression with aggression, rather than with conscious choices and target denial, can be dangerous. Teens and young adults, especially boys, need to know that it takes more courage and is more manly to “not fight” than to fight. This knowledge could save their lives, because teens and young men are at greatest risk of violence from competitive attacks by other young men.

The good news is that the “Everyday Safety” self-protection skills work most of the time and are almost always the safest choice. And that, if you need to fight to protect yourself, one strong self-defense move stops most attacks.

Additional Resources:
How to Pick A Good Self-Defense Program
One Strong Move: Step-by-Step Self-Defense Lessons for Stopping An Attack