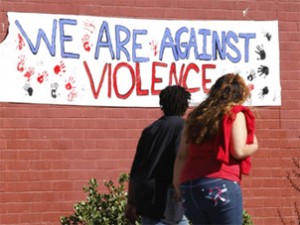 A heartbreaking example of the Bystander Effect was brutal sexual assault on a 15-year-old girl who was gang-raped in Richmond, California, while over 20 other teens and adults nearby did nothing to get help. Some even laughed and called others over to watch.

The girl had left her high school homecoming dance to walk across campus to call her father for a ride home. At the invitation of a friend, she stopped by a courtyard at the school that probably looked to her like a group of teens she knew hanging out, but was notorious as being a place for drinking, drugs, and violence. She was left unconscious after people in a house nearby heard what was happening and called the police.

The good news is that, instead of being hopeless, apathetic, or blaming the girl who was assaulted, both adults and teens from the school and the community gathered together in large numbers to address the problem. They have been taking a searching look at why this tragedy happened, reaching out to support the victim, and making a commitment to prevent something like this from ever happening again.

So, what are the lessons we can learn to prevent sexual assaults like this one in our own communities and schools?

The Bystander Effect, when people see a problem and do nothing, can happen in any community. People of any age, culture, or income level sometimes freeze or react poorly because

The Bystander Effect was in effect on many levels leading up to this brutal assault.

These same issues are not unique to Richmond. They are common in most communities and schools.

Most gang rapes happen because the attackers have lost their ability to be compassionate and get caught up in a group mentality that makes violence seem acceptable. Almost always, alcohol and/or drug abuse are part of these assaults. Gang rape takes place in financially struggling communities like Richmond, but it also happens in the most affluent of communities.

Too often, unlike in Richmond, sexual assaults of all kinds in more affluent communities are kept hidden because people don’t want to believe that things like that can happen here.

Instead of accepting that some places on or near a school campus are “notorious” for problems, parents, educators, and students need to join together to make illegal, unsafe behavior unacceptable anywhere at or near the school.

If school communities were to put as half as many resources into educating young people about the causes and prevention of sexual assault and other violence as they put into promoting sports and social events, students would gain the understanding and skills they need to take charge of the emotional and physical safety of themselves and others.

For example, teens are avid consumers of the media in all its forms, and many of their beliefs are shaped by what they see around them everywhere. Schools can prepare their students to become informed consumers. Young people can learn how the media perpetuates unrealistic body images, sexual assault, and other violence, so that they can make safer choices about how they are going to behave.

Two powerful educational video resources are Jackson Katz’s Tough Guise: Violence, Media & the Crisis in Masculinity and Jean Killbourne’s Killing Us Softly: Advertising’s Images of Women. In both cases, the Media Education Foundation provides free study guides to high schools and colleges to go along with the films.

Preparing Teens to Take Charge of Their Safety

In addition to developing understanding of the issues, all teens deserve the opportunity to practice the kind of People Safety skills taught in our Teenpower workshops including using their awareness; setting boundaries with people they know; using target denial; thinking first before they change their plan; getting help; leaving in a powerful and respectful way; de-escalating conflict; speaking up to redirect dangerous behavior; and, as a last resort, fighting to protect themselves from harm.

An assault is never the victim’s fault, but even in a really dangerous situation, knowing how to take effective action can often make a huge difference. Very early one Sunday morning when I was in college long ago, I was walking past a “notorious” fraternity on my way back to my apartment from an all-night grocery store. Suddenly, I was surrounded by a group of drunk young men whose Saturday-night party wasn’t over yet. They started pulling me towards their fraternity house, saying that they were going to show me a “good time.”

To this day, I believe that if I had collapsed or cried, I would have been raped by all of them. Instead, with huge indignation, I yelled into the face of the man in front of me, “What would your MOTHER think if she saw what you are doing?” He was so surprised that he let me go! I then turned to the man next to him and yelled, “If you had a SISTER, would you want someone to do this to HER?” They ALL let me go, picked up my groceries that had scattered all over the ground, and went back into their fraternity house to sleep it off.

Most of the time, even just one person taking leadership can overcome the Bystander Effect. A Red Cross video vividly shows how this works. In the film, a girl riding a bike has been hit by a car. As the girl lies in the street, the voices of different bystanders are saying aloud what people might be thinking: “She should have been more careful … I hope she’s not hurt too badly … Someone should really do something … Poor thing ….” As the girl lies bleeding, the different voices and faces of the people watching merge into a meaningless fog.

Suddenly in the film, one woman takes charge. She calls out in a clear compelling voice, “We need to HELP this girl! Who has a cell phone? YOU, call 911! YOU, direct traffic to go another way. WHO knows first aid?” Everyone is mobilized to help the fallen girl, who thankfully turns out not to have been too badly hurt.

We have dramatic success stories of how taking charge in an attack can prevent a tragedy. Once, one of our instructors saw a group of young men fighting. One man had picked up a tire iron and was about to hit the head of another who was lying on the ground. Our instructor knew that getting into the middle of this fight would not be safe, so he yelled, “RUN! The police are coming!” Everyone took off in different directions, ending the conflict.

Young people can learn that they have choices about how to respond, instead of getting caught up with the group mentality or stuck in the drama of the moment. If they are peers of the attackers, they can learn to say, “Violence against women is not cool! Let’s find something else to do.” If they don’t feel safe calling attention to themselves, they might be able to leave quietly and get help. Instead of texting friends to watch, they can text a friend to call the police.

Practicing Overcoming the Bystander Effect if You Are Attacked

Many people have heard stories about times when bystanders ignored attacks and cries for help. If you are being attacked, the people around you might not respond because their disbelief, fear, not knowing what to do, or denial can lead to the Bystander Effect.

To break through the fog of conflicting thoughts and feelings that can cause bystanders to become frozen or even join in, we have our students practice giving clear, loud information and orders to the people who are nearby. They practice moving away if they can, or holding their ground in Ready Position, while yelling at the person pretending to attack them, “STOP! LEAVE! HELP!” We show how they could yell out details about what is happening and a description of the attacker.

Giving specific orders to specific people is more likely to be effective than yelling for help in a general way to the world at large. For this reason, we have our teen and adult students practice pointing to bystanders and calling out clearly and compellingly, “YOU in the red shirt, come and help me!” Or, “YOU on the cell phone, hang up and call 911!”

In workshops with older children and teens, we often practice overcoming the bystander effect in the context of an accident, where someone has been hurt. One person sits or lies on the floor as if hurt. Two “bystanders” stand nearby looking confused. The student practicing points at bystanders, waves them to come over or go to get help, and calls out specific commands until the bystanders respond, such as, “YOU IN THE GREEN PANTS, DO YOU HAVE A CELL PHONE? GOOD! CALL 911! YOU WITH THE WHITE HAT, DIRECT TRAFFIC AWAY FROM THE ACCIDENT! WATCH OUT FOR CARS! DOES ANYONE KNOW FIRST AID? YOU DO? GREAT! YOU, COME AND HELP ME!”

The students pretending to be bystanders don’t respond until they have been given clear orders in a forceful way at least three times. (To be on the safe side, we remind our students that, in a medical emergency, their job is to get help and to avoid letting anyone move the injured person until professional help arrives, unless there is no other choice.)

Honoring Victims of Violence Instead of Blaming Them

The best way we can honor victims of violence is to follow the example of the people in Richmond and gather together to find ways to make our schools and communities safe, caring, respectful places for everyone.

When lack of judgment or skills leads to an assault, we can remember that no one deserves to be attacked. People who harm others either emotionally or physically need to be stopped and to learn how to use their power in positive ways instead of destructive ones.

We can all decide to Put Safety First by making decisions about providing sufficient supervision when organizing activities, by making teaching People Safety skills a priority, and by educating young people about what they can do to stop sexual assault and other violence.

For more information about Kidpower’s resources for teaching these People Safety Skills and concepts, please visit our online Library (free community membership) and our RelationSafe™ Bookstore.

You are welcome to download this Featured Article for personal use, and print one (1) copy for free – as long as you keep the PDF "as is" and do not post or share electronically, per our Permission to Use Requirements. By completing this form, you agree to receive emails from Kidpower and understand that you can unsubscribe at any time. You will receive an email with a secure, encrypted link to download the PDF. Please consider a donation to support our free online resources. Are you a member? Sign-up or Login for direct downloads (without entering your name and email) and free access to hundreds more Kidpower resources.