The Courage NOT to Fight Using Target Denial to Be Safe 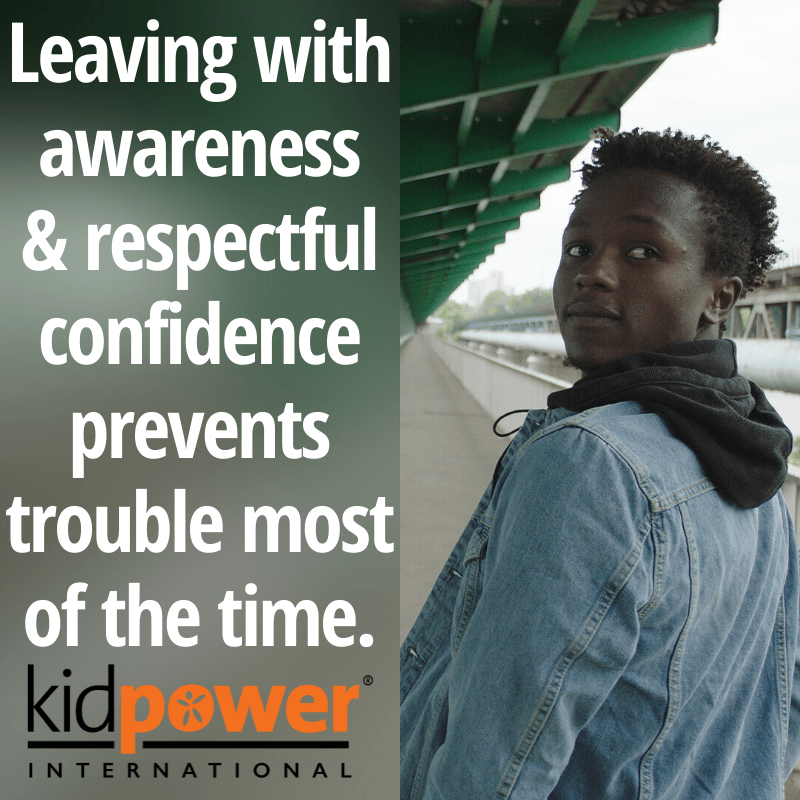 Too often, we hear tragic stories of someone – often a teen boy or young man – killed in a fight they escalated by arguing rather than choosing to walk away when they had the opportunity.

Teaching target denial strategies to young people can prepare them with skills to recognize those opportunities to move away from potentially dangerous situations early. Though some of these tragedies may not be preventable, target denial skills can prevent many of them.

Target denial skills are useful online as well as in real life situations. It means denying a potential attacker access to you, physically or emotionally. Another definition is, “Don’t be there!” Skills include:

Sadly, most young people are exposed daily to countless examples of “tough” behavior portrayed as “strong” behavior – such as fighting over possessions, insults, or challenges. This is an inaccurate, incomplete, and misleading portrayal of strength.

Young people deserve, but rarely get, different examples of strength, power, and confidence that are not escalatory, aggressive, or destructive – such as real-life examples of peers and mentors they admire and identify with showing the courage and strength NOT to fight.

As adults, we can give young people stories, examples, and skills that feel relevant, personally and cultrually, to counter the unsafe messages – as well as the opportunity to practice target denial skills to de-escalate a potential assault.

Kidpower instructor Jamiko Allen-Hercules once held a gym full of 13-year-old students spellbound when he told this story at their school:

“My great friend, Mark, went out with some of his friends to visit a bar we all went to a lot. We must have been there maybe a thousand times before and never had any problems. It was a night like any other night. Mark had probably had a little bit too much to drink. When he was walking home, a man came up and demanded his wallet. Mark said he’d never give up his wallet. The man shot him, and my buddy died right there in the street.

“For me, I wish my good friend who I’d known since junior high had given up his wallet. I wish Mark had said, ‘Never mind the money! I can always make more money!’ Because he fought over his stuff, I’ll never see my buddy again.

Jamiko’s voice choked up. The normally noisy gym was utterly silent as he continued, “If Mark had thought about it, he’d have thought about his brother, who is a couple of years younger than him, and his mom, and all his friends who don’t get a chance to have him in our lives anymore.

“I can never get my buddy back, but maybe in my telling this story, you’ll be prepared to make a wiser choice. What I want people who believe it’s cool to fight over their stuff or over insults to do is to THINK ABOUT IT. Think about what the world will be like for the people who love you without you. Think of all you’ll miss. It is not cool or honorable to be dead or in jail because you got into a conflict over stupid things like money or rude words. It’s just sad.”

Jamiko then demonstrated target denial. Ryan, another Kidpower instructor, took on the role of the attacker and shouted at him, “Your mother is a BLEEP!” He told the boys to imagine that BLEEP stood for the worst words they could imagine.

Jamiko walked calmly away and said in a peaceful voice, “I’m leaving!”

As the “attacker,” Ryan shouted after him, “Get back here, you wimp!”

Jamiko glanced back, said, “No, thanks!” without a trace of sarcasm, and continued on his way with awareness, calm, and confidence.

All the boys cheered, and then they each practiced the skills of staying centered and walking away when their teacher pretended to be an attacker.

In a high school workshop I taught personally in a different community, a boy we’ll call Fernando raised his hand and said, “Everybody would think I was weak if I didn’t stand up for myself. In fact, I’d think I was weak!”

Kidpower instructors – and many other adults! – know that arguing at this moment would have been a waste of time. I decided to give a demonstration. I asked Fernando to imagine that I, instead of looking like someone’s grandma, was a guy who might be a danger to him and that he was cornered in a place that was isolated.

I coached Fernando to get into a non-aggressive Ready Stance and to keep repeating in a strong, respectful voice, “I’m sorry I offended you. I just want to leave.”

I then took on an attacker role, waving, pointing, and shouting insults and threats at him, but not moving closer to him. Fernando held his ground without escalating the conflict. Finally, as the “attacker,” I turned away so he had room to leave. I coached Fernando to walk away while still paying attention to what I was doing, but with a peaceful, powerful attitude – and to let me have the last word. Finally, I shouted one final insult after him, and he continued on his way without re-engaging with me.

Since no attack is over until you’ve gotten help, I coached Fernando to tell his teacher what had happened and coached his teacher to say, “That sounds upsetting, but you handled yourself really well! Let’s keep talking to see if there’s anything else we need to do.”

As the whole class applauded, Fernando said in a surprised voice, “I just learned that it takes more courage NOT to fight than to fight!”

You don’t need to be a self-defense instructor to teach young people to use target denial. Discuss the kind of courage it takes NOT to fight. Point out positive examples and role models. Tell them to imagine you are a potentially dangerous person and coach them through acting out giving up their money and walking away from insults. Taking the time to help them become mentally prepared could save their lives.

For more resources to help teens and young adults be safe from assault, harassment, and other violence, see:

Prejudice and Discrimination: Protecting Ourselves and Others

You are welcome to download this Featured Article for personal use, and print one (1) copy for free – as long as you keep the PDF "as is" and do not post or share electronically, per our Permission to Use Requirements. By completing this form, you agree to receive emails from Kidpower and understand that you can unsubscribe at any time. You will receive an email with a secure, encrypted link to download the PDF. Please consider a donation to support our free online resources. Are you a member? Sign-up or Login for direct downloads (without entering your name and email) and free access to hundreds more Kidpower resources.