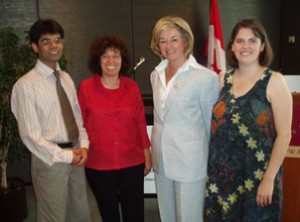 Our government partners include agencies that sponsor Kidpower projects to promote community safety locally and internationally. We are also grateful for the partnership of our Law Enforcement Advisory Committee members; these individuals continue to help us grow by building connections and by sharing the insights they’ve gained about personal and community safety during their many years as peace officers and detectives.

Agencies at the local, regional, and national level around the world have recognized the value of our work and taken the lead in improving access to our services in a variety of ways. They include:

The Watsonville Police Department, which recognizes Kidpower as a Law Enforcement Partner on their website’s home page and has sponsored our Parent Child Workshops since 1991, bringing Kidpower skills to hundreds of families in the area.

The Santa Cruz Commission for the Prevention of Violence Against Women, which has been a collaborator on various projects bringing Kidpower People Safety skills to children, teens, and women since 1994.

The Victim Compensation Program of the 4th Judicial District Attorney’s Office, Colorado, which has provided compensation for direct service for child victims participating in Kidpower of Colorado Springs programs since 1996.

The 4th Judicial District Victim Assistance Law Enforcement Fund, which has granted funds to Kidpower of Colorado Springs since 1998.

The New Zealand National Police Youth Education Services, which co-sponsored the development of the Confident Kids program in 2003, a program that continues to bring Kidpower skills to New Zealand schoolchildren nationwide every year.

The Canadian International Development Agency, which launched our highly successful Reaching Out Project by generously sponsoring the participation of delegates from developing countries in our 2005 International Conference. The Reaching Out Project provides our training for social service professionals around the world so they can foster the growth of People Safety skills in their own communities.

The City of Santa Cruz, which honored Kidpower with a Mayor’s Proclamation declaring September 29, 2007 “Kidpower Day.” The award served as a public spotlight on our work, highlighting that Kidpower is “making our community and world a safer place.”

The New Zealand Ministry of Justice, which awarded a two-year grant in 2009 for the Healthy Relationship Program, a Sexual Violence Primary Prevention Project supporting the development of services and materials tailored to the needs of teenagers and adults with developmental disabilities.

The Council on Developmental Disabilities Area 4, which helped people with developmental disabilities who have been victims of abuse from being revictimized, and prevent others at-risk from suffering abuse in the first place, by equipping them with experiential success-based tools and skills. Train, coach and mentor people responsible for the care of people with disabilities such as parents, caregivers and health, education and social services program staff in how to recognize, prevent, intervene, respond to and remedy (potential) abuse; how to teach these skills on their own.

The members of our Law Enforcement Advisory Committee lend their expertise and credibility to expand the depth, scope, and quality of our services. They include:

Karl Herndon, Deputy Sheriff and former detective. Currently a teacher of defensive tactics to law enforcement officers, Karl is also a longtime padded instructor whose expertise has improved our services.

Jim Howes, retired police officer and Community Relations Specialist with the Santa Cruz Police Department. Jim now teaches college courses in law enforcement and acts as an adviser and collaborator on community safety programs. Jim’s leadership in building the relationship between our organization and the Santa Cruz Police Department has led to a long collaboration helping many children learn skills to be safe.

Ian Kirkpatrick, police officer. As a founding board member of our New Zealand Trust, Ian helped create a collaboration between Kidpower and the National New Zealand Police Youth Education Services. This gave rise to the Confident Kids program, which bring Kidpower skills to public school children throughout New Zealand every year.

Manny Solano, Watsonville Police Chief. A longtime supporter who has consistently built Kidpower’s credibility with other law enforcement officials for many years, Manny has sponsored workshops, served as an ex-officio board member, and continues to provide consultation on criminal justice issues.