Memories of Eve From Marylaine Léger 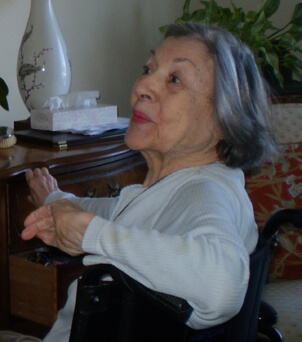 I call Eve my friend.

Although we lived many thousands of miles apart.

Saw each other a few days out of a year.

We enjoyed each other’s company.

And I will miss her dearly.

Our story started about 15 years ago when Irene, being her usual good judge of character, figured that Eve and I would get along. And so she introduced us.

Irene asked Eve if she would be willing to have a young, bubbly Montreal woman as a house guest for a few days while she was in California for Instructor Training. (Well… Irene probably didn’t introduce me quite that way. I’m guessing here. But I CAN be somewhat exuberant.)

Eve generously accepted to house this unknown young woman for a few days. Thanks to her, I was only a hop, skip and a jump away from the Kidpower office. And at the same time I still had my own private space to go to during our busy Kidpower training.

The afternoon of my arrival in California, Irene prepped me just before my visit to meet Eve. She said, “Eve is a wonderful soul. I’ve known her for years and she’s been a Kidpower volunteer since the very early days. She’s traveled the world and I am sure you will both get along beautifully. But, I need to warn you. The last house guest I sent her was not her best experience. So I’m counting on you to fix that as I am sure she’ll enjoy having you.”

Going back many weeks before my trip, Irene had told me a friend of hers, a walk away from her house, was willing to put me up during my stay. I was really looking forward to meeting this remarkable woman. She had volunteered with Irene to do so many of the needed tasks that helped Kidpower get started. And she had become one of Kidpower’s first major regular donors.

But now, with this carefully worded warning from Irene, I felt just a tinge of pressure to be on my best behavior. After all, Eve WAS over 80 years old at the time. She was a very cultivated woman and could sometimes be particular about the things she liked, and how she ran her house.

So as Irene and I walked together towards Eve’s for our first meeting and a cup of tea, I was excited and nervous all at once. We knocked on the door. And I heard a frail voice from far away say “I’m coming!”

“It takes her awhile to get to the door because of her hip,” Irene said to me.

We heard another “I’m coming,” and the door opened.

And there appeared this small, dainty, casually but stylishly dressed, elderly woman with the warmest eyes and smile. In a heartbeat, all my worries disappeared and I knew things would go well.

Our first moments together were delightful. We discovered many shared interests and loves: traveling, languages and world cultures, cooking, art, literature, gardening, and more.

That first tea together was just the beginning of the warmth I felt for this wonderful woman who had an amazing life with her husband. As an accomplished globe-trotter she marveled me with her knowledge of the world and cultures. And my marvel stemmed from how simply the wealth of her experience shined through her wonderful anecdotes, full of humanity and humor.

I think from that first meeting on, Irene knew I was taken with Eve. I’m not sure Eve was taken with me just yet. But it was a sure thing by the time we said good-bye to each other at the end of that first stay.

Over the years, Eve and I had some of the most wonderful breakfasts I’ve ever had. Not just because of the setting of her beautiful dinning room table with its fancy dishes and these wonderful jams, the best soft-boiled eggs I’ve ever had, scrumptious English muffins and tea. But mostly because of our joyous, often deep, sometimes sad, and regularly side-splittingly funny conversations. Long after I was done eating, we’d still be talking. And I really had to pull myself away from my chair to head off to Kidpower.

Over the years I’ve stayed numerous times with Eve. A few times with my partner Marc, whom she enjoyed. But I must admit, I really enjoyed having Eve all to myself for our breakfasts. As time went by, we wrote and talked on the phone occasionally in between my trips. We shared recipes and good book titles to read. I’ve even passed on some of her recipes to friends who thoroughly enjoyed them. When they asked who gave it to me, I’d reply, “My friend Eve in California gave it to me. She’s a wonderful cook. She’s got over 70 years of experience!” And then I’d laugh to myself at their reaction. Because who expects to have an almost 90-year-old friend when you’re in your thirties?

I had the immense joy, when my son Colin was two, to introduce them when we came out to California a few years ago. By this time, Eve was over 90 years old. And having a 2-year-old houseguest was out of the question. But my heart beamed with pride at having the two of them meet, even if it was for a brief visit.

Hearing of Eve’s declining health and dwindling desire to live over the past few years has been heart wrenching for me. Even if I did only get to see her but a few days out of the year, and less in the last years. In my eyes, Eve was a force of nature in her determination to enjoy life, even with the discouragement she could feel. Who wouldn’t when faced with hardship?

Beyond her diminishing health, I see her as someone who really truly loved life and the joys it brings. She believed strongly in the human connection and in the human spirit. She believed that people deserved a chance, and all the help they could get to become the exceptional people they could be. And I think that’s why she has been such a long-standing supporter, donor, volunteer and friend to Kidpower since it’s early days.

Eve, I hold your memory close to my heart and cherish those wonderful moments of human connection we shared.

I hope that wherever you are, you can see the trail of love you’ve sown during your path on Earth. And I’m thankful to have had the chance to share some of that path with you.

Love to you Eve, and to all those you hold dear.