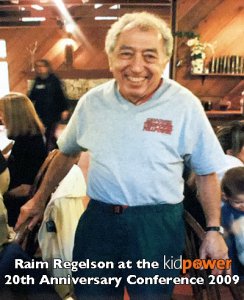 Many of the lessons and values we teach in Kidpower are thanks to my father, Raim Regelson.

For this reason, I thought you would appreciate my tribute to Raim below and a little about his last days, which I was fortunate enough to share and during which he taught me even more lessons. He was enormously proud of Kidpower and took a great deal of joy in coming to our conferences.

Even in his past few years of declining health, Raim continued to empower the people around him. After he died, one of his caregivers, Maria, who is originally from Nicaragua, told me, “Your father taught me so much!”

“What did he teach you?” I wondered.

“One thing I learned from him is that women should get paid the same as men,” Maria said.

“Didn’t you know that already?” I asked, wanting to be fair.

Maria smiled. “I had heard about it,” she said. “But I didn’t believe it until your father kept talking and talking to me about how women are equal to men and should be treated that way.”

I smiled back, a bit teary, remembering all the times he had told this shy daughter to, “Walk in like you OWN the place!”

As time goes on, I will be sharing more of the lessons that I’ve learned from Raim. For now, I hope you will enjoy learning more about my father in the tribute below. 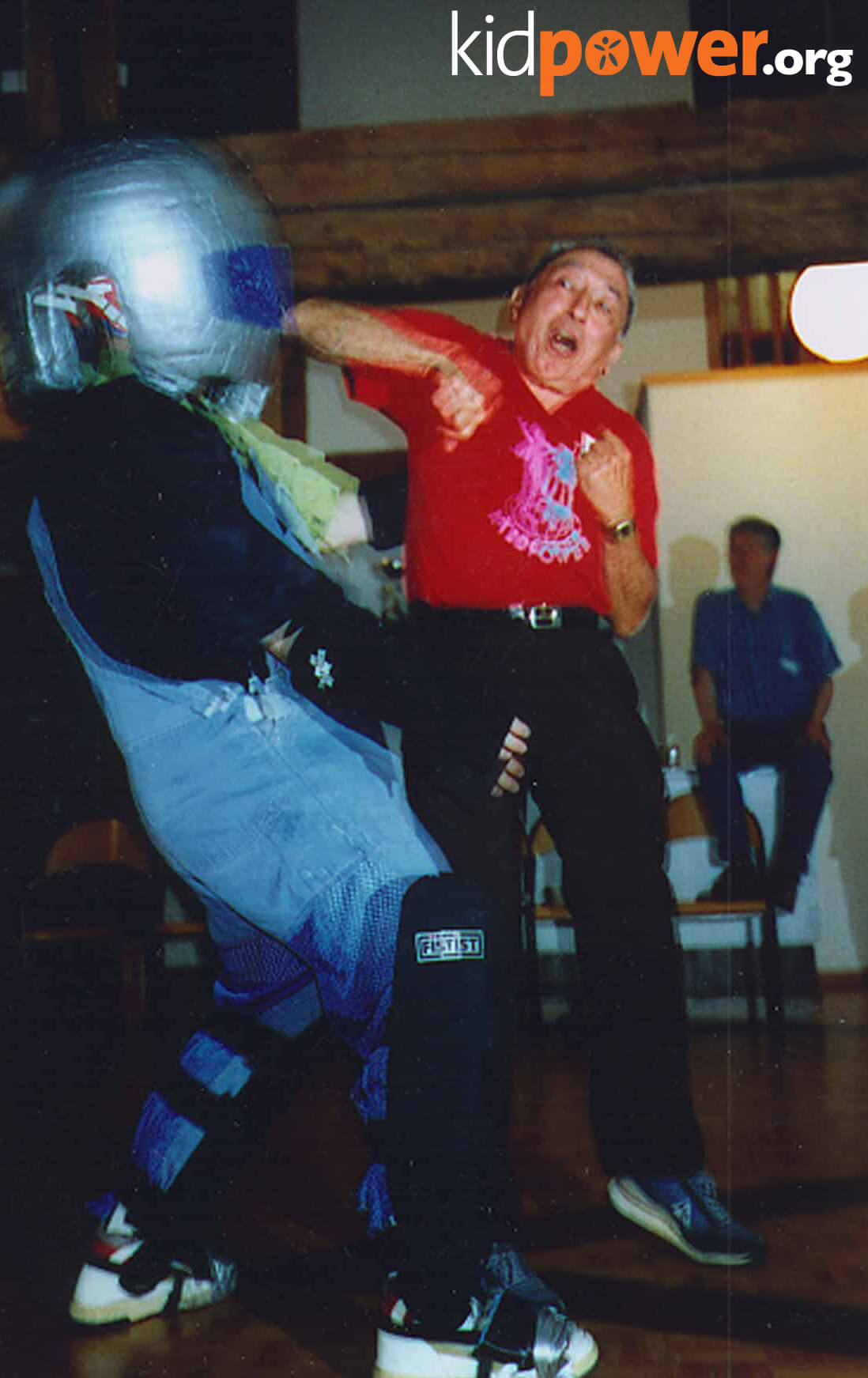 Raim practicing full force self defense in 1998 at our conference in Switzerland – with Joe Connelly, Kidpower Great Lakes Center Director

It is fitting that my father, Ephraim (Raim) Regelson, died on January 15th, the actual birthday of Martin Luther King, Jr., because of his passion for justice and equality.

In many ways, Raim was ahead of his time. Shortly after World War II, he led a government project in Florida with a team of African-American men and had a voucher to take them to lunch. I can imagine that the fact that the only place to eat nearby had a sign that read, “We serve Whites only” made it especially appetizing for him.

When the owner tried to refuse to serve his crew, Raim said with great authority, which was very likely entirely unfounded, that if the restaurant didn’t feed Raim’s crew, Raim would tell the Army to never let anyone spend money there again! They all got served.

When Raim asked my mother Lily to marry him in 1946, he told her that he wanted a partner, not just a wife. He was always proud of her career and fine with her sometimes making more money than he did. At her 90th birthday party last October, Raim gave a toast saying, “To the best partner anyone in the world could ever have!”

In his own successful career as a civilian scientist and a weapons development project leader with the Navy, he promoted women and advocated for them to have equal pay. He created a micro-miniature repair program that trained people with disabilities and gave them jobs in repairing very expensive parts of airplane equipment that would otherwise have been thrown away.

After his retirement, Raim enjoyed tending plants and harvesting fruits and vegetables from his garden, feeding Lily and family members and friends, and negotiating trades with local vendors in Farmer’s Markets. He took great pleasure in having extended-family reunions, inventing creative do-it-yourself methods to maintain their house and garden, and taking trips with Lily and sometimes with me, my sister Elaine, or my brother Ken. He was very proud of all three of his children, declaring, “I have released three tigers into the world!”

Although Raim and Lily brought their family up without any formal religion, they taught their 3 children to be proud of our Jewish heritage and stayed true to their humanistic values. They extended their commitment to justice for any people who were facing prejudice. In their 80s, they were at first shocked when they learned of my friendship with and advocacy for people of different sexual orientations and gender identities. But once my parents understood, their attitudes changed.

I will never forget watching TV with them on February 12, 2004. A day earlier, then-mayor of San Francisco Gavin Newsom had directed the city/county clerk to issue marriage licenses to same-sex couples. As we watched poignant interviews with couples waiting in line to be married, Lily said as Raim vehemently nodded his head, “People who want to get married ought to be able to get married!”

As the past few years brought declining health, Raim objected strongly to the loss of his independence and to the need for 24-7 care in his home. Even so, he came to care about the wonderful people who were helping him and Lily and were making it possible for the two of them to stay in their home.  He made friends with the best of them – even grew to love them – and inspired love in return. He never stopped planning how he could fix all the big problems in our world. As his neighbor Bob Fisher wrote, “If there are any imperfections in the afterlife, we can expect Raim already to be working to correct them, as he has never missed a day making everywhere a better place.”

For 11 days before he died, Raim remained in a deep sleep, not eating or drinking, not opening his eyes or responding. His breathing would stop and then start again. Thanks to Hospice, he was at home, in his own bed, and comfortable.

It did not seem as if he was fighting to live, but simply refusing to die until he absolutely had to, so that Lily could have him with her for as long as possible, sleeping next to her, somehow keeping his hands warm for her to hold – and so that we would have time to be ready for his passing. Death might be inevitable, but Raim was certainly not going to cooperate.

I feel honored to have been with my father as he took his last breaths, holding his cool limp hands in my warm strong ones, and talking with him, telling him we would be okay and we would take care of Lily, filling him with love, saying that it was time to leave this worn-out body so that he could BE FREE and GO IN POWER.

As my cousin Jessica wrote, “Raim to the very end – strong, persistent, stubborn, and defying all odds. May he enjoy his freedom and power wherever he is.”

Whatever our beliefs, I think all of us – including Raim – would agree that whether it is through memories, love, DNA, or perhaps some other plane of existence, Raim’s fierce loving spirit will never be far from any of the people whose lives he has touched, especially his family and friends, and, most of all, the “best partner anyone in the world could ever have,” my mother Lily.