Watching “Bully”: Why I Wouldn’t Be a Good Film Maker 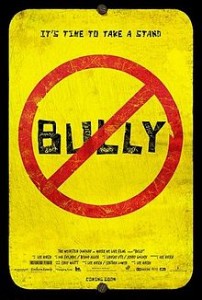 We couldn’t watch “Bully” without wanting to coach -could you?

One occupational hazard of teaching “People Safety” skills is that I cannot watch a movie without wanting to coach the characters to make better choices.  I would not have been able to endure the filming and directing necessary to create a movie like “Bully.” Instead, I would have felt compelled to try to change the stories as they were unfolding in front of me by providing guidance, support, and advocacy to stop the bullying.

Even with fictional films, I find it hard to resist speaking up. “LOOK OUT!” I’ll mutter to the heroine as she obliviously walks up to someone who is clearly a threat to her and then freezes. “Pay attention! Leave! Yell! Kick! Pull away! RUN!” However, doing this aloud annoys the people around me, so I’ve learned to coach silently.

Yes, I and other coaches here at Kidpower are probably just terrible movie-going buddies, especially for movies about kids being in harm’s way. At the same time, this is probably why people all over the world seek us out for help on how to address bullying problems for their families, schools, and youth organizations.

This urge was overpowering when my friend and colleague Erika Leonard and I went together to see “Bully,” a documentary recently released showing how bullying has affected the lives of five families. Both of us have heard countless stories about bullying from our students and people who contact Kidpower for help from around the world, but that didn’t brace us for watching this film. We both felt a deep compassion for the anguish of the families and friends in the film who had lost a child to bullying and for the lonely struggles of the kids being bullied.

Although Erika and I never looked at each other or made a sound, we felt each other’s empathy resonating strongly in our hearts and seemed to hear each other’s internal coaching echoing clearly in our brains.

As we watched the footage of one boy being punched, teased, and poked on the school bus, we wanted to whisper forcefully in his ear, “Don’t hide. Stand up and hold on so you won’t fall. Yell, ‘STOP’! … Kids who hurt you are not your friends. Get help!”

We wanted to tell the bus driver, who kept her eyes on the road and seemed to be ignoring the commotion behind her, “Pull the bus over. Wait until everything is calm. Report problems. Move trouble-makers to be next to you. Make sure your bus is a safe place for all the students.”

“OUCH! Please don’t say THAT!” we “thought at” the father who told his son that he had to stand up for himself or his younger sister will get bullied when she goes to middle school. “Tell your son that you are glad he is telling you, that he deserves to be safe everywhere he goes, and that YOU will help him.”

“LISTEN!” we wanted to coach the school administrator who made problems much worse by forcing a boy to shake hands with a kid who had pushed his head in the toilet. “He’s trying to tell you that this kid is still bothering him.”

“STOP! THAT’S NOT SAFE!” we wanted to direct the kids who were teasing, threatening, or hurting. “Let’s practice more positive of ways of using your power. You have the power to stay in charge of what you say and do so that you act safely and respectfully, no matter what you feel like doing in the moment.”

“Don’t give up. Keep telling until you get help!” we wanted to tell both parents and kids who were discouraged by the lack of response to their concerns.

We grieved for the children who had taken their lives and shook our heads as a school official tried to explain the problem away by saying that this is just the way kids are. “Bullying in schools,” we wanted to tell him, “is not because of the way kids are but because of unkind, unsafe behavior that is not being stopped by the adults in charge.”

With all our hearts, we wished that Kidpower had been there years ago to help the families who later lost their kids to bullying with guidance and support on  how to protect their children.

We cheered for the two teen girls who are making it despite going through hard times, with the help of their very supportive families. We wanted to shake hands with the father who was willing to support his lesbian daughter, even though doing so forced him to rethink his religious beliefs.

After the movie, Erika and I shared a large chocolate cupcake with hot chocolate filling at the Chocolate Café and debriefed.

We agreed that “Bully” does a great job of building awareness about bullying and motivating anyone who sees it to want to do something to make a difference. In addition to awareness and motivation, people also need to understand what they can do and to know how to do it in order to take the actions necessary to lead to change.

Kidpower’s book, Bullying: What Adults Need to Know and Do to Keep Kids Safe,  gives you the words to say and the actions to take to coach both adults and kids on how to stop bullying in the moment and to prevent future problems.

TUESDAY: “Bully” – Can Watching This Powerful Movie Make a Difference?

Whether you’ve watched the movie, “Bully,” or even just the trailer, we hope you’ll join this conversation with us here on our blog or on our Facebook page.

—  Irene van der Zande is the Executive Director and Founder of Kidpower Teenpower Fullpower International and author of the just-released Kidpower Book for Caring Adults: Personal Safety, Self-Protection, Confidence, and Advocacy for Young People, which has a foreword by Gavin de Becker, best-selling author of The Gift of Fear and Protecting the Gift and puts Kidpower’s 23+ years of expertise at your fingertips. Her book, Bullying: What Adults Need to Know and Do to Keep Kids Safe, is used by many families, schools, and youth organizations for their own anti-bullying programs

Please join the conversation below.  What do YOU think?

If you don’t see your comments on our blog, and you haven’t used foul language or spam in your message, please email us at safety@kidpower.org so we can find the problem and get your post up ASAP! We want you to be part of our ongoing conversation!